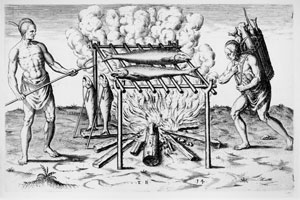 While the native diet may seem lacking by current nutritional standards, it may have been healthier than European diets before and during the Colonial period. The Native American population, including American Indians and Alaska Natives, once totaled nearly 24 million, with over 500 tribes. The diets of Native Americans varied by geographic region and climate. They lived in territories marked by specific natural boundaries, such as mountains, oceans, rivers, and plains. Hunting, fishing, and farming supplied the major food resources. Native Americans survived largely on meat, fish, plants, berries, and nuts.

The most widely grown and consumed plant foods were maize (or corn) in the mild climate regions and wild rice in the Great Lakes region. A process called nixtamalizacion (soaking dry corn in lime water) was used to soften the corn into dough, called nixtamal or masa. This was prepared in a variety of ways to make porridges and breads. Many tribes grew beans and enjoyed them as succotash, a dish made of beans, corn, dog meat, and bear fat . Tubers (roots), also widely eaten, were cooked slowly in underground pits until the hard tough root became a highly digestible gelatin-like soup. It is estimated that 60 percent of modern agricultural production in the United States involves crops domesticated by Native Americans. 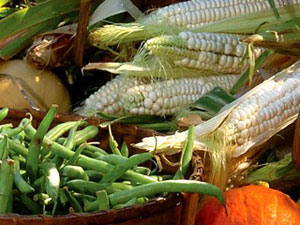 Many tribes preferred broth and herbed beverages to water. The Chippewa boiled water and added leaves or twigs before drinking it. Sassafras was a favorite ingredient in teas and medicinal drinks. Broth was flavored and thickened with corn silk and dried pumpkin blossoms. Native Americans in California added lemonade berries to water to make a pleasantly sour drink.

Native American diets and food practices have possibly changed more than any other ethnic group in the United States. Although the current diet of Native Americans may vary by tribe, and by personal traits such as age (e.g., young versus old), it closely resembles that of the U.S. white population. Their diet, however, is poorer in quality than that of the general U.S. population.

Though their lives were changed in many ways over the centuries, their cooking and eating traditions have become mainstays of contemporary American cuisine. Many Native American recipes have been adopted by white populations in different regions in the United States, including succotash in the South, wild rice dishes in the northern Plains, pumpkin soup in New England, chili in the Southwest, broiled salmon in the Pacific Northwest, and corn on the cob in most areas of the country. Indeed, Native Americans have influenced American cuisine in ways the white population has yet to acknowledge. Of greater importance, however, is the dire need to focus on the failing health of Native American Indians of South Carolina. The goals of the SCAIHDP are to bring to light the health problems faced by indigenous peoples, to understand how we came to our unhealthy situations and what we can do about them.

This project also focuses on connecting with the natural world, finding ways to do our part to be responsible consumers and to halt environmental degradation. ECSIUT is committed to cultivating organic lifestyles in every Native American Indian tribal community. Education and Restoration of traditional plants, eating, preservation of plant life is the goal of this project. 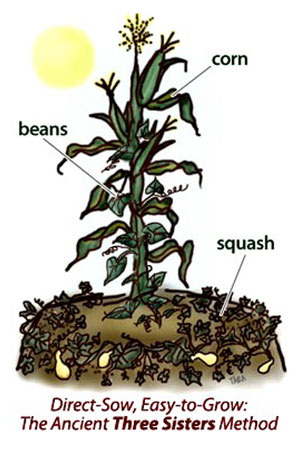 i.e. The three sisters – maize, beans, and squash – were important in the diet of eastern North American Indians of South Carolina in the centuries just prior to contact by Europeans. Long domesticated in Mexico, these crops spread into the Southwest and eastern North America. Their use is well documented in historic records. These included beans, squash and corn, which contain a variety of nutrients. Native people ate corn fresh or dried. It was stored and ground for later use in making corncakes, corn mush and grits. Beans, also easy to dry and store, offered a vegetable source of protein when meat sources were unavailable. Tribes ate squash varieties either fresh or dried and stored for later use. Their hardened shells offered temporary eating and drinking containers. Native Indian diets have changed drastically, and not always for the best. As much as 62 percent of modern Native Americans eat a diet too high in fat, while as few as 10 percent consume a relatively healthy diet. There is a need to restore our ancient diet and eating habits and to bring health and nutritional education to today’s Native Americans. With diabetes and heart disease afflicting Native Americans in enormous numbers, a big push is on to return the community to its traditional diet, built around the ‘three sisters’ of corn, beans and squash. Much can be learned from American Indians, among the original practitioners of holistic health. Their diet is deeply entwined with the environment and spirituality.

There’s plenty to aspire to—Native Americans are among the original practitioners of holistic health. Traditionally, their diet and lifestyle were not only tied to all things environmental and natural but were deeply enmeshed with spirituality. That’s one reason why nothing these hunters and gatherers brought back for their sustenance went to waste; everything had a purpose.

South Carolina is a state blessed with a rich botanical heritage. Our distinct geographical provinces and an abundance of water provide habitat for a diversity of flora, which rivals anywhere in the world. Early explorers such as William Bartram and André Michaux depicted a region so botanically rich that it must have seemed like Eden. Native American Indians and the indigenous people of SC for thousands of years, ate healthy , planted healthy gardens and lived in harmony with nature. This project to our attempt to restore that ancient knowledge and wisdom to help with diets and eating habits of Natives today. Today most Native American Indian South Carolinians hardly realize what botanical treasures abound, nor do most understand why it is important to protect and promote our native species. Native plants and the native landscape in many ways define us as a state and a people, giving us a sense of belonging, a sense of place. Native plants are our heritage.

Because mass transport of foods was impossible, native Indian diets varied by the geographical region in which the individual tribes lived. Vegetables and berries provided the main sources of food for most tribes who were adept farmers and gatherers, while tribes who lived near large bodies of water enjoyed diets rich in fish. Meat was a treat when available, but it wasn’t limited to bison and deer.