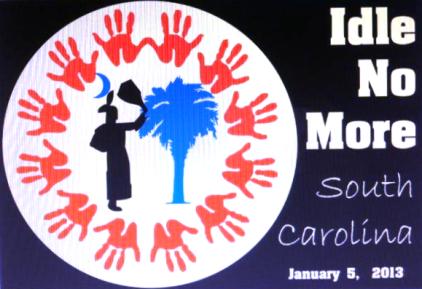 Details from the IDLE NO MORE event

Columbia – Come to honor CHIEF THERESA SPENCE and her message to SING and UNITE in solidarity with our Canadian relatives and other tribes across United States and around the world . To express our voices and our sacred rights as indigenous people. Let’s gather and network to build for our future (our children). Bring your drums, sing and dance and stand united on the many issues in Indian Country – water, land, sacred sites, coal, NGS, uranium, save the confluence, protect the peaks, etc. Bring signs, banners, flags, FRIENDS and FAMILY!

WHY “Idle No More” of SOUTH CAROLINA?

Where? On the steps of the Gervais St. side of the state house in Columbia, SC Who? American Indian people of SC and friends~ positive movement that includes all cultures in a vision for justice for all people and for our earth.

Idle No More calls on all people to join in a revolution which honors and fulfills Indigenous sovereignty which protects the land and water. Colonization continues through attacks to Indigenous rights and damage to the land and water. We must repair these violations, live the spirit and intent of the treaty relationship, work towards justice in action, and protect Mother Earth.

Idle No More is a peaceful organization that is working towards profound social, political, and economic change. Our goal is to use education to build consciousness and awareness in all of the Americas (North, South and Central & Canada and in South Carolina) on the resurgence of Native American Indian Indigenous sovereignty and environmental protections. We are working on building relationships within our communities across South Carolina as well as globally. We Support Chief Spencer & our First Nations of Canada brothers and sisters in their efforts. We also call out to each Native American Indian community to organize teach-ins and peaceful demonstrations – we believe an educated public is the best form of action.

WHAT IS “Idle No More” Movement? As we stand ‘Idle no More’, we are rising up with One Heart, One Mind; a gathering of spiritual beings, a gathering of cultural warriors; it is beautiful movement, it is the lighting of spiritual fire of the Seven Generations; our Ancestors are watching and their spirits are dancing. This movement is reflective of our sacred responsibility as Stewards or caretakers of the land, which is a peaceful endeavor as nothing grows in violence, except more violence and as our world view is that we are related to all of creation, all races and all peoples, we must remain peaceful. We are chosen people we are charged with preservation, care and nurturing of the sacred land for the next Seven Generations. May Creator bless us in our sacred work.

There are however, many traditional sacred spaces, ceremonial centers, significant rock formations and meditative spaces that Native American Indian people and communities have created and used for thousands of years and still use today. The Mound builders of the Mississippian and Woodland historic periods and even the contemporary locations that SC Native American Indian people have created that include: churches, gardens, meditative spaces and ceremonial centers are all significant to the Native American Indian people of South Carolina from many different tribes, nations, groups and traditions. Traditional cultural properties are places associated with the cultural practices or beliefs of a living community. These sites are rooted in the community’s history and are important in maintaining cultural identity. Examples of traditional cultural properties for Native Americans can include natural landscape features, places used for ceremonies and worship, places where plants are gathered to be used in traditional medicines and ceremonies, and places where artisan materials are found.

Some of these sites in South Carolina hold cultural significance to local tribes and there are likely other locations that are not identified in the archaeological records that may be important to Native American communities. Documented site types include prehistoric habitation sites, clay beads, bedrock mortars, petro glyphs, lithic quarries, and caves, and historic mines, rail and wagon roads, homesteads, mills, and ancient town sites (like the Cherokee Lower Villages of the Upcountry) . These properties and other types of cultural resources range from ancient hunting camps to nineteenth-century gold mining boomtowns together representing approximately 10,000 years of human activity.

“The heartbeat of the world is felt from our feet to our pounding hearts in a way that cuts across culture…that is why we ask all peoples to stand with us in solidarity and in observance of the important goals of this grassroots movement, “ …We ask for a reaffirmation from South Carolina of the religious integrity of a people who have worshipped for centuries in a sacred place beneath them.”“For many Tribes in North America, sacred wild mountains, rivers and other natural formations exist as physical beings formed as part of a whole by forces that interconnect people with them,” explained Dr. Will Moreau Goins, Chief of the Cherokee Indian Tribe of South Carolina-ECSIUT ( State Recognized).“ We must revive the ancient wisdom and the guiding principle of an indigenous land ethic of caring for the land and the waters. Now is the time to begin this dialogue with the “first people” of South Carolina the Native American Indian tribal and spiritual leaders in the state’s recognized tribal communities and nations. We are here to raise awareness and to begin this dialogue with the people of South Carolina and the leadership here. This is why we are on the Statehouse steps in solidarity with our indigenous people of Canada and throughout the Americas,” he further explained. “Through protecting sacred sites and the practice of restoration for humans and for their environment, we can become more responsible and closely aligned with our future.” “Introduced diseases, foods, and habits, combined with the loss of their land and the colonialists’ forced denial of their traditions have had devastating effects on a people that had thrived in South Carolina since 600 AD. Today part of our battle is to protect our resources and use them sustainably so the next generations will also have the benefit of living off the healthy foods of the land and waterways. I find it hard to separate healing and fighting for the land. If you’re ill then the whole family suffers, and if the family suffers, it extends into the community. It’s the same with the land. The land is alive – a source of strength, inspiration, and of healing. When the land suffers, we become ill.” “We also envision this Rounddance Flash Mob as an opportunity for education or re-education about social justice, an opportunity for building greater social harmony and the on-the-ground application of the idea of ‘celebrating cultural diversity’ through real empowerment of a minority cultural population. Healing can begin through the process of righting past wrongs.” “Furthermore, These sacred places of our origins create a vision of what is and what can be. They hold the patterns and the gyroscopes for the balance of life and they outline for us our reciprocal responsibilities to restore and protect the lands and waters. This balance includes respect for sacred places, those centers of the universe where changes born every day reach out to shape our shared destiny…”

HISTORY OF THE “IDLE NO MORE” Grassroots Movement

Idle No More began with 4 ladies; Nina Wilson, Sylvia McAdam, Jessica Gordon and Sheelah McLean who felt it was urgent to act on current and upcoming legislation that not only affects our First Nations people but the rest of Canada’s citizens, lands and waters.

The focus is on grassroots voices, treaty and sovereignty, it began in the early part of October when discussing Bill C 45. All 4 women knew that this was a time to act, as this bill and other proposed legislation would affect not only Indigenous people but also the lands, water and the rest of Canada.

With the focus on the most urgent bill knowing it would initiate attention to all other legislation, the 4 ladies held rallies and teach-ins to generate discussion and provide information. They then decided a nation wide event was garnered so all could participate, thus, The National Day of Solidarity & Resurgence was called for December 10th, 2012, to oppose all legislation and to build solidarity while asserting inherent rights and nationhood while protecting our lands for all people.

SOUTH CAROLINA’S “IDLE NO MORE” MANEFESTO: Native American Indian people and Communities & Tribal Governments in South Carolina stand in indigenous solidarity with the international “Idle No More” movement. We agree and contend that…..

We contend that: The Treaties are nation to nation agreements between First Nations and the British Crown who are sovereign nations. The Treaties are agreements that cannot be altered or broken by one side of the two Nations. The spirit and intent of the Treaty agreements meant that First Nations peoples would share the land, but retain their inherent rights to lands and resources. Instead, First Nations have experienced a history of colonization which has resulted in outstanding land claims, lack of resources and unequal funding for services such as education and housing.

We contend that: The state of Canada has become one of the wealthiest countries in the world by using the land and resources. Canadian mining, logging, oil and fishing companies are the most powerful in the world due to land and resources. Some of the poorest First Nations communities (such as Attawapiskat) have mines or other developments on their land but do not get a share of the profit. The taking of resources has left many lands and waters poisoned – the animals and plants are dying in many areas in Canada. We cannot live without the land and water. We have laws older than this colonial government about how to live with the land.

We contend that: Currently, this government is trying to pass many laws so that reserve lands can also be bought and sold by big companies to get profit from resources. They are promising to share this time…Why would these promises be different from past promises? We will be left with nothing but poisoned water, land and air. This is an attempt to take away sovereignty and the inherent right to land and resources from First Nations peoples.

We contend that: There are many examples of other countries moving towards sustainability, and we must demand sustainable development as well. We believe in healthy, just, equitable and sustainable communities and have a vision and plan of how to build them.