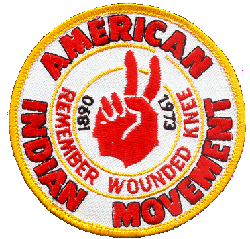 ECSIUT supports the efforts of AIM and many of the ECSIUT membership are active with the AIM movement & activities. The AIM Chapter of South Carolina had leadership from the Cherokees of SC.

In the 30 years of its formal history, the American Indian Movement (AIM) has given witness to a great many changes. We say formal history, because the movement existed for 500 years without a name. The leaders and members of today’s AIM never fail to remember all of those who have traveled on before, having given their talent and their lives for the survival of the people.

At the core of the movement is Indian leadership under the direction of NeeGawNwayWeeDun, Clyde H. Bellecourt, and others. Making steady progress, the movement has transformed policy making into programs and organizations that have served Indian people in many communities. These policies have consistently been made in consultation with spiritual leaders and elders.The success of these efforts is indisputable, but perhaps even greater than the accomplishments is the vision defining what AIM stands for. Indian people were never intended to survive the settlement of Europeans in the Western Hemisphere, our Turtle Island. With the strength of a spiritual base, AIM has been able to clearly articulate the claims of Native Nations and has had the will and intellect to put forth those claims.

The movement was founded to turn the attention of Indian people toward a renewal of spirituality which would impart the strength of resolve needed to reverse the ruinous policies of the United States, Canada, and other colonialist governments of Central and South America. At the heart of AIM is deep spirituality and a belief in the connectedness of all Indian people. During the past thirty years, The American Indian Movement has organized communities and created opportunities for people across the Americas and Canada. AIM is headquartered in Minneapolis with chapters in many other cities, rural areas and Indian Nations.

The Preamble and complete text of the Trail of Broken Treaties 20-Point Indian Manifesto.